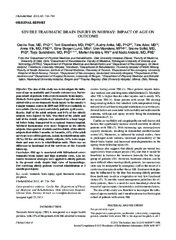 Objective: The aim of this study was to investigate the influence of age on mortality and 3-month outcome in a Norwegian cohort of patients with severe traumatic brain injury (TBI).