Physical activity levels in adults and elderly from triaxial and uniaxial accelerometry. The Tromsø Study 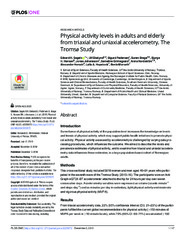 Methods - This cross-sectional study included 5918 women and men aged 40–84 years who participated in the seventh wave of the Tromsø Study (2015–16). The participants wore an ActiGraph wGT3X-BT accelerometer attached to the hip for 24 hours per day over seven consecutive days. Accelerometry variables were expressed as volume (counts·minute-1 and steps·day-1) and as minutes per day in sedentary, light physical activity and moderate and vigorous physical activity (MVPA).