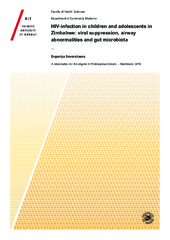 Sub-Saharan Africa remains the region with the highest burden of HIV among both children and adults. Access to antiretroviral therapy (ART) has improved survival, yet data on long-term virological outcomes are scarce. In addition, recent evidence indicates that HIV-infected ART-treated children are at increased risk of lung impairment, and data on the pathological mechanisms involved are limited. Due to the growing numbers of children with HIV surviving into adulthood, there is an urgent need for studies on the pathogenesis of lung impairment in this population group. Thus, the overall aim of this work was to study virological outcomes in individuals initiating ART in Harare, Zimbabwe and to investigate two components of host immune defence - nitric oxide (NO) and gut microbiota among HIV-infected ART-treated children and adolescents with and without lung impairment. Paper I was a retrospective cohort study of HIV-infected children and adults that started ART at a hospital in Harare. In this study, significantly more children than adults did not reach viral load suppression by 12 months ART. Among those who achieved viral suppression, the incidence of viral failure, low level viraemia and viral blips was also higher in children. In Paper II, we found that HIV status was associated with lower exhaled NO levels. History of tuberculosis among HIV-infected children was associated with lower exhaled NO levels, while airway obstruction alone was not. In addition, higher haemoglobin levels and neutrophil count were associated with higher exhaled NO levels in HIV-infected participants. Paper III demonstrated that HIV status was associated with lower gut species richness estimates, while prolonged ART led to richer gut microbiota in HIV-infected children. At the same time, no association between airway obstruction or prior tuberculosis and gut biodiversity indices was observed in our study. HIV-infected participants were enriched in Corynebacterium, Finegoldia, Anaerococcus compared to HIV-uninfected participants. The present work stresses the importance of virological control in the paediatric HIV-infected population. Low levels of exhaled NO may be a marker of HIV- and tuberculosis-induced alterations in pulmonary physiology while low gut biodiversity associated with HIV infection may have further implications in microbiota-targeted interventions.