Development of a Framework for the Investigation of Speed, Power and Kinematic Patterns in Para Cross-Country Sit-Skiing: A Case Study of an LW12 Athlete 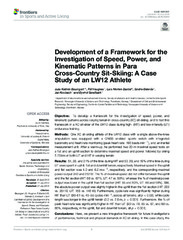 Objective: To develop a framework for the investigation of speed, power, and kinematic patterns across varying terrain in cross-country (XC) sit-skiing, and to test this framework in a XC sit-skier of the LW12 class during high- (HIT) and low-intensity (LIT) endurance training.

Methods: One XC sit-skiing athlete of the LW12 class with a single above-the-knee amputation was equipped with a GNSS enabled sports watch with integrated barometry and heart rate monitoring (peak heart rate: 195 beats·min−1), and an inertial measurement unit. After a warm-up, he performed two 20-m maximal speed tests on a flat and an uphill section to determine maximal speed and power, followed by skiing 5.75 km at both LIT and HIT in varying terrain.

Conclusions: Here, we present a new integrative framework for future investigations of performance, technical and physical demands in XC sit-skiing. In this case study, the increase in speed from LIT to HIT was due to increases in cycle rate in all terrains, while cycle length was less affected. Although the absolute power output was slightly higher in the uphill compared to the flat section both for HIT and LIT, the athlete worked closer to his maximum power output in the flat section.