Triggers and risk factors of first and recurrent venous thromboembolism 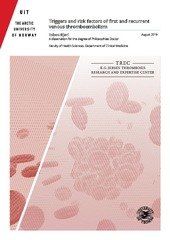 Venous thromboembolism (VTE), encompassing both deep vein thrombosis and pulmonary embolism, is a major public health concern due to substantial morbidity and mortality. Around half of all VTE cases are hospital-related. Importantly, VTE also has life-long implications, as a large proportion of VTE-patients suffer either a recurrent event or chronic complications. The first aim of the thesis was to investigate hospitalization as a trigger of incident VTE. Secondly, we aimed to provide new insights to the epidemiology of recurrence, and to identify novel risk factors for recurrent VTE. The study population was derived from one or more of the first six surveys of the Tromsø Study, with nearly 40.000 participants. All potential cases of first lifetime and recurrent VTE events during this time-period were recorded. The target population for all papers were participants who had suffered a first lifetime VTE in the in the period 1994-2012. We found that hospitalization was a major trigger factor for incident VTE, and that the VTE risk was mainly influenced by the length of hospital stay rather than the frequency of hospital admissions in the 90-days prior to VTE. Furthermore, hospitalization was a high-risk situation also in the absence of immobilization, although immobilization contributed substantially to the VTE risk among hospitalized patients. Secondly, we discovered that the rates of recurrence and mortality after a first VTE remain high, particularly in the following year after a VTE. In paper III, we found that patients with a VTE related to hospitalization for medical illness had a high risk of recurrence, even after the competing risk of death was taken into account. Finally, we identified that d-dimer, measured at first VTE diagnosis, could be a potential biomarker to identify patients at low risk of recurrence, in whom short-term anticoagulant therapy could be sufficient.