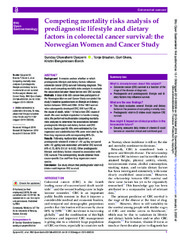 Background - It remains unclear whether or which prediagnostic lifestyle and dietary factors influence colorectal cancer (CRC) survival following diagnosis. This study used competing mortality risks analysis to evaluate the association between these factors and CRC survival.

Methods - A total of 96 889 cancer-free participants of the Norwegian Women and Cancer Study completed the study’s baseline questionnaire on lifestyle and dietary factors between 1996 and 2004. Of the 1861 women who subsequently developed CRC, 550 had CRC as the cause of death, while 110 had a non-CRC cause of death. We used multiple imputation to handle missing data. We performed multivariable competing mortality risks analyses to determine the associations between prediagnostic lifestyle and dietary factors and CRC survival. Cause-specific HRs were estimated by Cox regression and subdistribution HRs were estimated by the Fine-Gray regression with corresponding 95% CIs.