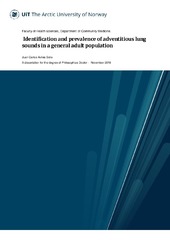 The main goal of this work was to describe the prevalence of adventitious lung sounds (wheezes and crackles) in a general population. We obtained lung sound recordings from 4033 participants in the 7th survey of the Tromsø. We observed a crude prevalence of adventitious lung sounds in 28% of the participants; 18 % had wheezes, 13% had crackles. Age, female sex, self-reported asthma, and current smoking predicted the occurrence of expiratory wheezes. In the case of inspiratory crackles, significant predictors were age, current smoking, rheumatoid arthritis mMRC ≥2, low oxygen saturation and FEV1 Z-score. We explored the variation of inter-observer agreement. We asked seven groups with four doctors each to classify 120 lung sound recordings. The probability of agreement for crackles varied between 65% and 87%. Congers kappa ranged from 0.20 to 0.58 and four of seven groups reached a k ≥0.49. For wheezes, we observed a probability of agreement between 69% and 100% and kappa values from 0.09 to 0.97. Four out of seven groups reached a k≥0.62. We also tested if the use of spectrograms could improve the classification of lung sounds. We conducted a study in which 23 medical students classified the same lung sounds with and without spectrograms. Fleiss kappa values for the multirater agreement were k=0.51 and k=0.56 (p=.63) for wheezes without and with spectrogram, respectively. For crackles, we observed k=0.22 and k=0.40 (p=<0.01) in the same order. In addition, we tested the possibility for variation in the prevalence of adventitious lung sounds in a subsample of 116 participants in the Tromsø Study breathing at spontaneous airflow velocity vs standardized airflow velocity at 1.5 L/s. The prevalence was not significantly different between the two methods. However, the agreement between the two methods was k= 0.32 for expiratory wheezes and k=0.13 for inspiratory crackles.