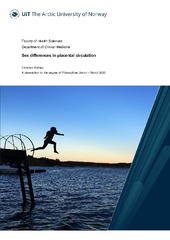 Sexual dimorphism in placental morphology and function has increasingly been acknowledged. The differences in adaptation to the intrauterine environment and in perinatal/neonatal outcomes between the sexes has been well described. Doppler-derived hemodynamic parameters of the feto-placental and utero-placental circulations are commonly used to monitor fetal wellbeing in clinical practice, but whether they are significantly influenced by fetal sex have not been adequately scrutinized. The main objective of this thesis was to investigate if sex differences exist in some of the Doppler-derived hemodynamic parameters obtained from the umbilical artery or the umbilical vein during the second half of normal pregnancy, and to establish sex-specific longitudinal reference ranges for clinical use. Noninvasive two-dimensional B-mode and Doppler ultrasonography were used to investigate placental hemodynamics in a cross-sectional study of low-risk pregnancies at 22+0-24+0 weeks’ gestation, and two longitudinal studies in low-risk pregnancies examined serially at 4-weekly intervals during 20-40 weeks’ gestation. During the second half of pregnancy, we found no significant sex differences in any of the umbilical vein Doppler-derived parameters studied. The Doppler-derived indices of umbilical artery impedance were associated with fetal heart rate, and female fetuses had significantly higher values for these indices during 20+0-36+6 weeks’ gestation, but not later. When comparing the mean values for fetal heart rate between the two groups, they were similar from 20+0 to 25+6 weeks, but a divergent trend was observed thereafter with female fetuses showing increasingly higher heart rate. The sum of these findings reflects temporal sexual dimorphism in placental circulation associated with the maturation of the fetoplacental unit. Sex-specific longitudinal reference ranges for the most commonly used Doppler-derived hemodynamic parameters of both umbilical artery and umbilical vein were established, believing that it might refine the surveillance of risk pregnancies.