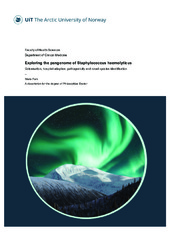 Staphylococcus haemolyticus is a ubiquitous bacterium recognised as a significant cause of nosocomial infections. Today it represents one of the most clinically relevant staphylococcal species, hallmarked by its extreme genome plasticity and multiresistant phenotype. Despite its relevance, little is known about its virulence repertoire or how it causes disease. The main objective of this PhD thesis was to achieve a better understanding of S. haemolyticus colonization, virulence and hospital adaption by using a combination of comparative genomics and phenotypic assays. By the use of whole genome sequencing and pangenome analysis, we showed a clear phylogenetic separation between clinical and commensal isolates, and a distinct genomic signature of clinical S. haemolyticus isolates. Eighty-eight percent of the clinical isolates were multidrug resistant, compared to only 11 % of the commensal isolates. Clinical isolates typically carried the resistance genes aacA-aphD and mecA, in addition to the associated IS element IS256. These three genes were absent in most of the commensal isolates and were therefore good candidates for markers to differentiate the two groups. Additionally, sraP and the polysaccharide capsule operon, important virulence and immune evasion factors in other staphylococcal species, were more often detected in clinical isolates. We compared the adhesive and biofilm forming properties of clinical and commensal S. haemolyticus isolates, and showed that clinical isolates formed a thicker biofilm. By developing a novel method for investigating surface proteins expressed during human host colonization, we identified several surface proteins, with potential roles in colonization (sdr-like proteins, SceD), biofilm formation (Atl, Ebh) and immune evasion (TirS and SasH-like). In addition, we described a new species of the Staphylococcus genus; Staphylococcus borealis. The novel species was closely related to S. haemolyticus, but compared to S. haemolyticus, S. borealis showed considerable phylogenetic distance, yellow pigmented phenotype and the ability to produce urease. In conclusion, these studies have greatly advanced our knowledge of S. haemolyticus and its potential as a nosocomial pathogen. We have uncovered several potential markers which can distinguish clinical and commensal isolates and potentially be used as diagnostic markers of invasive disease. We also identified several important colonisation, virulence and immune evasion factors in S. haemolyticus, - some of which may be possible future targets for therapy. Finally, we demonstrate the high discriminatory power of whole genome sequencing by identifying a new staphylococcal species, now described as Staphylococcus borealis.