When Bodies Speak and Words Act - poetry, psychosomatic illness and the lost art of medicine 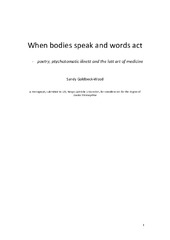 This is a discussion of what poetry has to do with medicine. It is about the psychological necessity and communicative purpose of art, with poetry as an example. It is about what poetry demands of the poet - humility, undogmatic diligence, resilience in the face of complexity, and the ability to think and feel at the same time. It is about a vital service poetry performs for poet and public which is unamenable to instrumentalisation and systematisation.

This is also about the communicative potential of illness, and the therapeutic need for this to be heard. It is about the receptive, interpretive demands this places on doctors, who, unlike artists, are trapped within a model which does not support a receptive, interpretive stance. It is about the ineffectiveness, waste, and inhumanity which can result when the body´s hidden communication is misunderstood, and the toll this takes on doctor and patient.

Presenting poetry and psychosexual medicine as comparable processes of retrieving and interpreting important but elusive insight, I demonsrate how both activities are relational or dialogical, involving inclusive, attentive ”listening” to both physical and emotional, objective and subjective phenomena. Both involve a creative, constructive search for coherence between different forms of data and different ways of knowing. Both deal with embodied meaning, and are embodied practices not learned through theory alone. Both are also formative processes which develop in the practitioner, aswell as technical competence, a moral stance charcterised by openness, humility, and truthfulness.

The moral stance, epistemic awareness and technical skills found in these two practices exemplify a needed counterbalance to what I term unopposed empiricism in modern healthcare. I argue that this epistemic imbalance is unethical not only because it is ineffective, wasting valuable resources on futile investigations or ineffective treatments, but also because it is unjust, denying subjective experience, relationship and meaning as central determinants of illness and health.

Fortunately, creative, interpersonal elements live on in many clinical encounters, despite a climate in modern healthcare which favours operationalisability over understanding. This shows how doctors and patients can overcome unopposed empiricism, and recognise and harness the irreducible therapeutic power of the doctor´s skilled, diligent, attentive human presence. Is is a call to rediscover the poetry in medical practice.