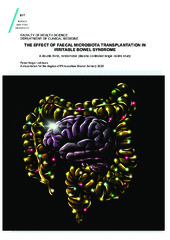 Irritable bowel syndrome (IBS) is common disorder of the lower gastro intestinal tract associated with a poor quality of life. Revealing the interplay between the microbiota and the host has lead to a better understanding of IBS. A disturbance in the bidirectional communication in the microbiota-gut-brain axis is suggested to be involved in the pathophysiology of IBS. The microbiota in this context is the bio-ecological community composed of multiple microorganisms in the gut. We hypothesised relief of symptoms in IBS from colonic infusion of faecal suspension from healthy donors, referred to as faecal microbiota transplantation (FMT). In a double blind, randomized, placebo controlled, single centre trial we compared the effect of donor vs autologous FMT, delivered by colonoscopy, in patients diagnosed by the Rome 3 criteria. We also assessed the prevalence of differential diagnoses to the diagnosed participants. We included 90 participants. Three participants did not show up for treatment and four were diagnosed with microscopic colitis by pinch biopsies obtained during the treatment procedure. Thus, 83 of the 90 included remained in a modified intention-to-treat analysis. The primary endpoint three months after treatment, defined as the proportion of responders with relief in gastrointestinal complaints, showed 65% responders in the donor FMT group vs 43% in the autologous FMT group (P=0,049). We found a corresponding improvement in fatigue and quality of life six months after treatment. These findings support initiating a phase three multi centre study to evaluate implementation of FMT as treatment for IBS in clinical practice. The secondary analysis assessing the timeline of the FMT effect suggested a profound and sustainable treatment response in subgroups of participants. The results support the concept of the involvement of the microbiota-gut-brain axis in IBS pathophysiology, as gastro intestinal complaints, poor quality of life and fatigue were available for FMT therapy in subgroups of participants. The lack of effect in certain subgroups could be explained by a dominating central disturbance not affected by FMT therapy.