The effect of blood pressure on cognitive performance. An 8-year follow-up of the Tromsø Study, comprising people aged 45–74 Years 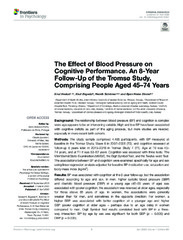 Background: The relationship between blood pressure (BP) and cognition is complex were age appears to be an intervening variable. High and low BP have been associated with cognitive deficits as part of the aging process, but more studies are needed, especially in more recent birth cohorts.

Methods: The study sample comprised 4,465 participants, with BP measured at baseline in the Tromsø Study, Wave 6 in 2007–2008 (T0), and cognition assessed at follow-up 8 years later, in 2015–2016 in Tromsø Study 7 (T1). Age at T0 was 45–74 years, and at T1 it was 53–82 years. Cognition was assessed with three tests: The Mini Mental State Examination (MMSE), the Digit Symbol Test, and the Twelve-word Test. The associations between BP and cognition were examined specifically for age and sex using linear regression analysis adjusted for baseline BP medication use, education and body mass index (kg/m2).

Results: BP was associated with cognition at the 8-year follow-up, but the association differed according to age and sex. In men, higher systolic blood pressure (SBP) and diastolic blood pressure (DBP) at a young age (45–55 years of age) was associated with poorer cognition; the association was reversed at older ages, especially for those above 65 years of age. In women, the associations were generally weaker than for men, and sometimes in the opposite direction: For women, a higher SBP was associated with better cognition at a younger age and higher SBP poorer cognition at older ages – perhaps due to an age delay in women compared to men. Digit Symbol Test results correlated best with BP in a three-way interaction: BP by age by sex was significant for both SBP (p = 0.005) and DBP (p = 0.005).

Conclusion: Increased SBP and DBP at the younger age was clearly associated with poorer cognitive function in men 8 years later; in women the associations were weaker and sometimes in the opposite direction. Our findings clearly indicate that interactions between age and sex related to BP can predict cognitive performance over time. Men and women have different age trajectories regarding the influence of BP on cognition.