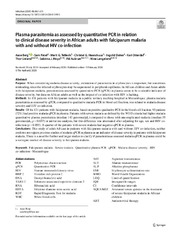 Purpose - When considering malaria disease severity, estimation of parasitemia in erythrocytes is important, but sometimes misleading, since the infected erythrocytes may be sequestered in peripheral capillaries. In African children and Asian adults with falciparum malaria, parasitemia as assessed by quantitative PCR (qPCR) in plasma seems to be a valuable indicator of disease severity, but data on African adults as well as the impact of co-infection with HIV is lacking.

Methods - In 131 patients with falciparum malaria in a public tertiary teaching hospital in Mozambique, plasma malaria parasitemia as assessed by qPCR, compared to qualitative malaria PCR in blood cell fraction, was related to malaria disease severity and HIV co-infection.

Results - Of the 131 patients with falciparum malaria, based on positive qualitative PCR in the blood cell fraction, 93 patients (72%) had positive malaria qPCR in plasma. Patients with severe malaria as defined by the WHO criteria had higher malaria quantitative plasma parasitemia (median 143 genomes/µL) compared to those with uncomplicated malaria (median 55 genomes/µL, p = 0.037) in univariate analysis, but this difference was attenuated after adjusting for age, sex and HIV co-infection (p = 0.055). A quarter of the patients with severe malaria had negative qPCR in plasma.