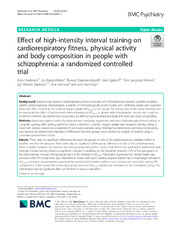 Background - Exercise may improve cardiorespiratory fitness in people with schizophrenia, however, possible condition-specific cardiorespiratory disadvantages, a scarcity of methodologically sound studies, and conflicting results raise questions about the effect of exercise on maximal oxygen uptake (VO2max) in this group. The primary aim of this study, therefore, was to investigate the effect of high-intensity interval training on VO2max in people with schizophrenia. Second, we sought to determine whether the intervention would have an effect on general physical activity (PA) level and body composition.

Results - There were no significant differences between the groups on any of the cardiorespiratory variables neither at baseline nor after the program. There were also no significant within-group differences in any of the cardiorespiratory fitness variables between the baseline and post-program time points, despite that 61% of the participants performing high-intensity interval training showed a significant increase in workload on the treadmill. However, 47% of the participants in the high-intensity interval training group had a ≥ 5% increase in VO2max. Participants supervised by mental health care providers with PA competence (e.g. rehabilitation center staff, sport scientist, physical trainer) had a much larger increase in VO2max compared to participants supervised by mental health workers without such competence, and when adding PA competence to the model, the intervention group increased VO2max significantly compared to the comparison group. The intervention had no significant effect on PA level or body composition.

Conclusions - The intervention did not improve VO2max, PA level or body composition but succeeded in increasing workload on the treadmill. With regard to VO2max, approximately half of the patients may be considered responders.