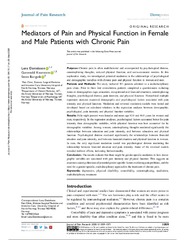 Results: Fifty-eight percent were females and mean age 43.8 and 46.0 years for women and men, respectively. In the regression analyses, psychological factors accounted better for pain intensity than demographic variables, while physical function was best accounted for by demographic variables. Among women, catastrophizing thoughts mediated significantly the relationships between education and pain intensity, and between education and physical function. Psychological distress mediated significantly the relationships between financial situation and pain intensity, and between financial situation and physical function in women. In men, the only significant mediation model was psychological distress mediating the relationship between financial situation and pain intensity. Some of the reversed models revealed indirect effects, indicating bidirectionality.

Conclusion: The results indicate that there might be gender-specific mediators in how demographic variables are associated with pain intensity and physical function. This suggests an awareness among clinicians of potential gender-specific factors mediating pain problems, and the need for a gender-specific, multidisciplinary approach in the treatment of chronic pain.