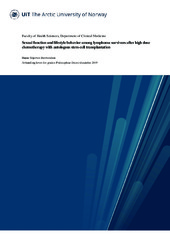 Background/Aims: Lymphoma is one of the most prevalent malignancies among young persons. The survival rate is high, though comes with a risk of late effects including secondary cancer, cardiovascular disease (CVD) and chronic fatigue (CF). Some lymphoma patients require especially intensive treatment, high dose chemotherapy with autologous stem-cell transplantation (auto-SCT), to achieve curation or prolonged survival. This thesis aimed to investigate sexual function and lifestyle factors among auto-SCT survivors and to compare the results to controls.

Methods: A national cross-sectional survey was conducted, inviting 399 survivors who were >18 years at auto-SCT, treated during 1987-2008 and without ongoing cancer treatment. Participants responded anonymously on a mailed multi-item questionnaire. Independent t-test and Χ2-test were performed for comparison of mean and prevalence, respectively, between groups. Age-adjusted and multivariable logistic and linear regression models were used to assess associations between explanatory variables and categorical and linear outcome variables, respectively. Effect size was estimated to assess clinical significance of differences. Controls were randomly drawn from three normative cohorts, using frequency matching.

Results: In total, the response rate was 78%, 60% was men and median follow-up time was 8.5 years. In paper I, male survivors had lower sexual functioning and satisfaction than controls. In multivariable models, lower sexual functioning was related to increasing age, less physical activity and CF. Reduced erectile function was related to CVD. In paper II, female survivors more frequently reported personal-issues as cause of sexual inactivity than controls. Sexual activity was related to younger age, being in a relationship and hormone replacement therapy among the postmenopausal women. Sexually active survivors had more sexual discomfort (vaginal dryness and coital pain) and were more often too tired to have sex compared with controls. Reduced sexual functioning was related to younger age, total body irradiation, mental distress and CF. In paper III, 55% was sedentary and overweight while 18% smoked. Compared to controls, more survivors were adhering to lifestyle recommendations. Among survivors, an unhealthier lifestyle was related to male gender, less chemotherapy prior to auto-SCT, a higher burden of somatic disease and CF.

Conclusions: Sexual function was lower among survivors than controls and there was a potential for improvement of healthy lifestyle factors among survivors.