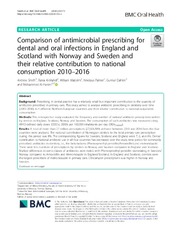 Background - Prescribing in dental practice has a relatively small but important contribution to the quantity of antibiotics prescribed in primary care. This study aimed to analyse antibiotic prescribing in dentistry over time (2010–2016) in 4 different Northern European countries and their relative contribution to national outpatients consumption.

Methods - This retrospective study evaluated the frequency and number of national antibiotic prescriptions written by dentists in England, Scotland, Norway and Sweden. The consumption of such antibiotics was measured using WHO defined daily doses (DDDs), DDDs per 100,000 inhabitants per day (DIDs100,000).

Results - A total of more than 27 million prescriptions (27,026,599) archived between 2010 and 2016 from the four countries were analysed. The national contribution of Norwegian dentists to the total primary care prescription during this period was 8%. The corresponding figures for Sweden, Scotland and England were 7, 6, and 8%. Dental contribution to National antibiotic use in all four countries has decreased over the study time period for commonly prescribed antibiotics in dentistry, i.e., the beta-lactams (Phenoxymethyl penicillin/Amoxicillin) and metronidazole. There were less numbers of prescriptions by dentists in Norway and Sweden compared to England and Scotland. Marked differences in some classes of antibiotics were noted with Phenoxymethyl penicillin dominating in Sweden/Norway compared to Amoxicillin and Metronidazole in England/Scotland. In England and Scotland, dentists were the largest prescribers of metronidazole in primary care. Clindamycin prescriptions was higher in Norway and Sweden.

Conclusion - Noticeable differences exist in prescribing patterns for the management of oral infections. High levels of metronidazole use in England and Scotland also require further analysis. All countries over the study period showed a decrease in total numbers of antibiotics prescribed.