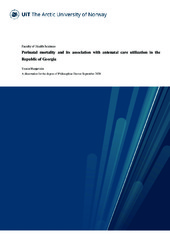 Background: Despite recent achievements, perinatal mortality (PM) rates remain high worldwide, especially in low-income countries (>30 per 1000 births). PM is defined as the death of a fetus/livebirth between 22 completed weeks of gestation and the first 7 days of life. Simple, non-invasive interventions could reduce PM rates, since most deaths are caused by preventable conditions. Adequate antenatal care (ANC) is one of the steps towards better pregnancy outcomes. Georgia has one of the highest PM rates in Europe, but they also have high ANC coverage. We aimed to understand the causes of PM and the impact of ANC on PM in the Republic of Georgia.

Methods: The Georgian Birth Registry was the main source of data, and the Vital Registration System was used as a supplementary source for data validation. Mothers who delivered in 2017-2019 and their newborn were included in the analysis. We used the Wigglesworth classification to categorise causes of death, and the adequacy of prenatal care utilisation index to analyse ANC. We assessed potential confounders by directed acyclic graphs and detected associations between exposures and outcomes by logistic regression analyses.

Results: The majority of stillbirths in Georgia were reported as unexplained (80%) and antepartum (85%), and preterm birth complications and congenital malformations were the most common causes of early neonatal death (END). The stillbirth to END ratio was 2.1, and newborn who died during first day of life represented 30% of the total number of ENDs. Unattended pregnancies (no ANC attendance) comprised 5.6% of all pregnancies in our study and carried more than two times higher odds of PM compared to attended pregnancies. Sixty-two percent of women did not receive adequate care during the study period. Women in the inadequate care group had the highest odds of PM when using the adequate care group as a reference; women who received intermediate care had the lowest odds of PM.

Conclusion: Initially, our study revealed potential misclassification between stillbirths and ENDs. We suspect that asphyxiated newborn who died shortly after birth might be classified as antepartum stillbirths. Adequate ANC has the potential to reduce PM and should be used as a tool for improving newborn health outcomes. Further, some women without any particular medical need may receive more than the recommended number of ANC visits. Increasing the number of ANC visits from four to eight did not seem to improve PM rates. Therefore, it is not sufficient to look only at the number of ANC visits; the quality should also be monitored.