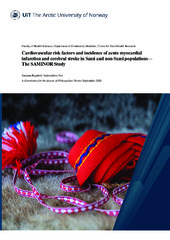 The overall aim of this thesis was to examine and compare cardiovascular risk factors, time-trends in these risk factors, and the incidence of cardiovascular disease in Sami and non-Sami populations living in the same rural geographical area. We used information from the SAMINOR Study, which is a Population-based Study on Health and Living Conditions in Regions with Sami and Norwegian Populations. Paper 1 was based on data from the SAMINOR 2 Clinical Survey (SAMINOR 2, 2012–2014), which was conducted in 10 municipalities of Northern Norway. In this paper, conventional cardiovascular risk factors (hereafter referred to as conventional risk factors) were compared and the 10-year risk of fatal or non-fatal acute myocardial infarction or cerebral stroke (hereafter referred to as 10-year risk) was estimated using the NORRISK 2 risk. In Paper 2, we examined the change in conventional risk factors and 10-year risk from the SAMINOR 1 Survey (SAMINOR 1, 2003–2004) to SAMINOR 2 in participants aged 40–79 years that lived in 10 municipalities in Northern Norway. In Paper 3, SAMINOR 1 participants aged 30 and 36–79 years were followed until the end of 2016. We compare the risk of fatal or non-fatal acute myocardial infarction, coronary heart disease, ischemic stroke, cerebral stroke and a composite endpoint (acute myocardial infarction or cerebral stroke) in Sami and non-Sami populations. We observed that Sami had a somewhat elevated risk of cerebral stroke compared to non-Sami, whereas the risk of coronary heart diseases were similar. The higher risk of cerebral stroke was partially explained by height. These results are supported by observation of small or no ethnic differences in traditional cardiovascular risk factors and a similar change of these over time in Sami and non-Sami. For both Sami and non-Sami men and women, we observed a favourable change in traditional cardiovascular risk factors from 2003–2004 to 2012–2014. At the present time, no specific preventive measure are needed as we observed only small and no ethnic differences in risk. However, studies that disentangle what adult height represents in these populations, and studies of cardiovascular risk is Sami and non- Sami are warranted.