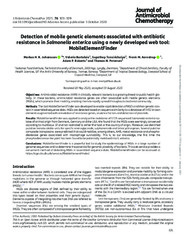 Objectives - Antimicrobial resistance (AMR) in clinically relevant bacteria is a growing threat to public health globally. In these bacteria, antimicrobial resistance genes are often associated with mobile genetic elements (MGEs), which promote their mobility, enabling them to rapidly spread throughout a bacterial community.

Methods - The tool MobileElementFinder was developed to enable rapid detection of MGEs and their genetic context in assembled sequence data. MGEs are detected based on sequence similarity to a database of 4452 known elements augmented with annotation of resistance genes, virulence factors and detection of plasmids.

Results - MobileElementFinder was applied to analyse the mobilome of 1725 sequenced Salmonella enterica isolates of animal origin from Denmark, Germany and the USA. We found that the MGEs were seemingly conserved according to multilocus ST and not restricted to either the host or the country of origin. Moreover, we identified putative translocatable units for specific aminoglycoside, sulphonamide and tetracycline genes. Several putative composite transposons were predicted that could mobilize, among others, AMR, metal resistance and phosphodiesterase genes associated with macrophage survivability. This is, to our knowledge, the first time the phosphodiesterase-like pdeL has been found to be potentially mobilized into S. enterica.

Conclusions - MobileElementFinder is a powerful tool to study the epidemiology of MGEs in a large number of genome sequences and to determine the potential for genomic plasticity of bacteria. This web service provides a convenient method of detecting MGEs in assembled sequence data. MobileElementFinder can be accessed at https://cge.cbs.dtu.dk/services/MobileElementFinder/.