A biomarker approach to explain high cardiovascular disease burden in Russia: insights from population-based studies in Russia and Norway 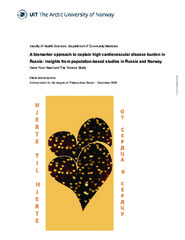 Although the problem of cardiovascular disease (CVD) in Russia has been the subject of attention for decades, a definitive and comprehensive explanation of why the CVD burden there is so high and generally greater than in many other countries has still not been found. In this thesis, I have attempted to advance research on these issues by examining the role of blood lipids, heart damage biomarkers (high sensitivity cardiac Troponin T and NT-proBNP), alcohol use, and diabetes. The methodological approach that I have chosen for Paper 1 and Paper 3 was to compare the biomarker levels in two population-based studies: Know Your Heart (Russia) and Tromsø 7 (Norway). There were no substantial differences in lipid profiles between Know Your Heart and Tromsø 7, however, higher mean high sensitivity C-reactive protein reflected higher pro-inflammatory status in Russian sample. Moreover there was evidence of higher levels of cardiac wall stretch (NT-proBNP) and heart damage (high sensitivity cardiac Troponin T) biomarkers in Know Your Heart compared to Tromsø 7. This work is the first time that levels of these heart damage biomarkers in two population-based studies in Russia and elsewhere have been undertaken. In Paper 3, I compared diabetes prevalence defined as self-reported diabetes and/or medication use for diabetes and/or glycated haemoglobin (HbA1c) ≥ 6.5 % between Know Your Heart and Tromsø 7. Obesity (measured as BMI and waist circumference) explained a substantial proportion of differences in diabetes prevalence between KYH and Tromsø 7 in women but not in men. The analysis in Paper 2 was based on data from Know Your Heart study only and was a comparison of biomarker levels in extremely heavy drinkers in Russian addiction treatment centers to those in the general population of Arkhangelsk (Russia). The levels of NT-proBNP, high sensitivity cardiac Troponin T, and high sensitivity C-reactive protein were much higher in extremely heavy drinkers compared to non-problem drinkers. This thesis implicates non-atherosclerotic pathways as a possible explanation for high cardiovascular disease burden in Russia. This conclusion is supported by higher levels of NT-proBNP and high sensitivity cardiac Troponin T in Know Your Heart compared to Tromsø 7, while atherogenic lipoproteins are at similar levels in both studies. The biomarker profile of extremely heavy drinkers in Russian addiction treatment centers supports the non-ischemic damage as an aetiological pathway leading to heart disease as a consequence of heavy alcohol use. High prevalence of diabetes mellitus in Russia, including a higher proportion of undiagnosed and untreated cases, contributes to cardiovascular disease burden of both atherosclerotic and non-atherosclerotic origin. Strategies to reduce the burden of high cardiovascular disease in Russia should include steps to reduce the prevalence of heavy drinking as well as tackling the high burden of diabetes.