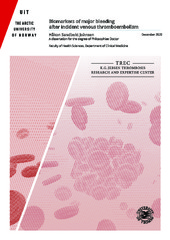 Major bleeding (MB) events are feared and potentially fatal complications of anticoagulant treatment in patients with venous thromboembolism (VTE). Even though several clinical risk factors are associated with MB risk, the predictive power of currently available risk assessment models remain limited for VTE. The aim of this thesis was to identify biomarkers of MB risk during the first year after an incident VTE. In all three papers included in this thesis, the study population consisted of subjects with incident VTE derived from the Tromsø study, a population-based cohort study with repeated measurements and blood sampling of the inhabitants in Tromsø. Participants were symptomatic VTE cases requiring treatment, who were diagnosed with objective criteria from 1994 to 2012/16. Information on VTE characteristics, including blood sample measurements, was collected from the medical records at the University Hospital of North Norway (UNN). In the first paper, subjects were genotyped for prothrombotic single nucleotide polymorphisms (SNPs) in candidate biomarker genes, while D-dimer and platelet count, measured at VTE diagnosis, were assessed in the second and third papers. MB events were classified according to the International Society on Thrombosis and Haemostasis (ISTH) criteria and identified by review of medical records during the first year after VTE diagnosis. In the first paper, we found no association between individual SNPs (rs6025 [Factor V Leiden], rs1799963 [Prothrombin G20210A], rs8176719 [ABO blood type], rs2066865 in FGG, and rs2036914 in F11) or number of risk alleles and MB risk. The results were similar after excluding patients with active cancer, and when restricting the analysis to the first three months after VTE. In the second paper, we excluded subjects with cancer and those who developed an in-hospital VTE prior to the analyses and found that a high D-dimer (upper 20th percentile) was associated with increased risk of MB. The risk was particularly pronounced in patients with deep vein thrombosis (DVT), provoked VTE and during the first three months after diagnosis. In the third paper, we found that platelet count measured at VTE diagnosis was associated with higher risk of MB in a dose-response manner. Furthermore, when platelet count was measured years prior to developing a VTE (at the Tromsø study inclusion), an increasing platelet count was also associated with a higher risk of MB. Our findings suggest that D-dimer and platelet count, which are already widely available for most of the VTE patients after the initial diagnostic investigation, may aid the identification of VTE patients at risk of MB during anticoagulant treatment.

The thesis was based on data from Tromsøundersøkelsen available at http://tromsoundersokelsen.uit.no/tromso/.