Metacognition and decision-making in schizophrenia: Exploring how aberrant processing and representation of uncertainty may explain cognitive-behavioral biases 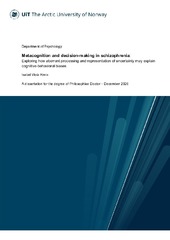 The cognitive profile associated with schizophrenia has long been a research subject of interest. A plethora of studies have not only revealed cognitive deficits but also cognitive biases, meaning qualitative deviations in the way information is processed and evaluated. Such biases are for example reflected in findings of diminished metacognitive accuracy, or premature and disadvantageous decision-making. Interestingly, though often studied separately from one another, many of these biases may arise from similar underlying mechanistic aberrancies related to the processing and representation of uncertainty. This thesis aimed to explore this overarching role of uncertainty with a particular focus on metacognitive processes and decision-making in schizophrenia. Cognitive-behavioral assessments were conducted using computerized tasks, complemented with pupillometric measures and cognitive modelling techniques. In Paper I, the relationship between decision-making under uncertainty and metacognitive accuracy was investigated. In paper II, decision-making under different kinds of uncertainty was examined, while pupil size was recorded as an indicator of norepinephrinergic activity, a postulated neurochemical marker of uncertainty. In paper III, self-reported and objectively assessed effort were inspected as knowledge- and regulation-based components of metacognition. Across all studies, the uncertainty-related measures of cognitive-behavioral performance were surprisingly similar between individuals with schizophrenia and the respective control group. However, subtle differences emerged within subgroups and on cognitive model-based estimates of uncertainty representation. Furthermore, pupillometric measures revealed significant differences in the way individuals with schizophrenia process relevant information, pointing towards diminished effort allocation and decreased tracking of uncertainty-dependent informational salience. The findings are discussed within a wider framework regarding the potentially central role of uncertainty for various clinical and cognitive-behavioral symptoms of schizophrenia.