Exploring the roles of TRIM27 and TRIM32 in autophagy 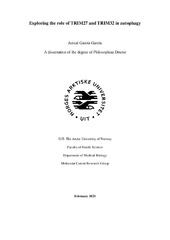 Tripartite motif family proteins (TRIMs) are a wide family of E3 ligases involved in the control of several cellular processes such as intracellular signaling, innate immunity, transcription, cell cycle regulation and carcinogenesis. In recent years, some members of this family have been found to have a role in autophagy.

The central theme of this thesis is the role of two TRIM proteins in selective autophagy. I joined this project born from a screen of 22 different TRIM proteins using the double-tag assay, which represented the 11 TRIM family subgroups. The goal of this screen was to identify candidates with a potential role in autophagy, alleging that their presence in the lysosome linked them somehow with the autophagy process. From our screen, TRIM27 and TRIM32 were identified as new potential autophagic substrates, and we decided to further investigate their role in autophagy.

We found that TRIM27 has an effect in starvation-induced autophagy and associates with core autophagy proteins and the autophagy receptors p62/SQSTM1 and NBR1. Furthermore, TRIM27 interacts directly with and ubiquitylates p62/SQSTM1. We established TRIM27 KO cells, which showed high expression levels of the lysosomal protein LAMP2 and formation of big LAMP2 rings in the cytosol.. TRIM27 is proposed to act as an oncogene. In line with this, we identify TRIM27 mRNA levels to be strongly upregulated in cancer tissue from breast cancer patients. Intriguingly, we found the protein level of TRIM27 in various breast cancer cell lines to be inversely correlated with LAMP2 and LC3B expression. This suggests a potential role of TRIM27 in autophagy in certain types of breast cancer.

We also examined the autophagic role of TRIM32, including two mutant variants of TRIM32 that are associated with Limb-Girdle-Muscular-Dystrophy 2H (LGMD2H) or Bardet-Biedl-Syndrome 11 (BBS11), respectively. First, we found that TRIM32 is directed to autophagic degradation by p62/SQSTM1, but also act as a regulator of p62/SQSTM1 autophagic activity. This formed a feedback loop that was controlled by the direct interaction and ubiquitylation of p62/SQSTM1 by TRIM32. Interestingly, the TRIM32 mutant implicated in the muscular dystrophy disease LGMD2H failed to ubiquitylate p62/SQSTM1. Next, we further studied the role of TRIM32 towards the other proteins in the SLRfamily of autophagy receptors. We found that TRIM32 interacts and ubiquitylates the autophagy receptor NDP52, stabilizes the phosphorylated form of the autophagy regulator TBK1 and facilitates mitophagy. Lastly, we studied how TRIM32 auto-ubiquitylation regulates its activity and stability. We found that TRIM32 contains a PEST sequence, which exposure seems to be regulated by ubiquitylation and acetylation. This was a novel finding since to date, no PEST sequence has been identified in TRIM proteins. Taken together, these findings highlight the pivotal role of TRIM27 and TRIM32 as regulators of selective autophagy.