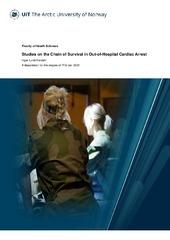 Background: Sudden death due to out-of-hospital cardiac arrest (OHCA) remains a major health issue with estimated 250-300.000 cases in Europe/year. Survival after OHCA depends on a well-functioning Chain of Survival. The Chain of Survival concept of early access, early cardiopulmonary resuscitation (CPR), early deﬁbrillation and good post-resuscitation care is the documented and recommended guide for improving outcome after OHCA. I aimed to assess if targeted attempts to strengthen the weak links of our local chain; quality of advanced life support (ALS) and post-resuscitation care, would improve outcome in paper I. Physician-manned ambulances (PMA) is believed to facilitate optimal management of OHCA but had not been sufﬁciently documented and paper II investigates if there is increased survival among patients treated by a PMA in our local EMS. As further improvement in survival rates after OHCA remains a challenge, I aimed to investigate the early links in the Chain of Survival, bystander CPR and CPR training in paper III. One of the most important strategies is to identify the arrest immediately and initiate CPR. Quality of bystander CPR skills may influence OHCA outcomes. Consequently, CPR training for the public is of utmost importance. Bystanders trained in CPR are three times as likely to perform CPR than those untrained.

Methods: Locally adapted Utstein style forms, dispatcher recordings, and ambulance-/hospital records were collected and reviewed. Outcome categories were non- survival/survival to hospital discharge with cerebral performance categories (CPC) for both paper I and II. Values for parametric data are given as means with standard deviations. Comparisons of continuous data were analysed by one-way ANOVA for parametric data in paper II. Categorical data were analysed using linear by linear associations for trends over time periods in paper I. p-Values ≤ 0.05 were considered signiﬁcant. To recruit study participants for the bystander CPR part of the study (paper III), 237 soldiers from the Norwegian armed forces were invited to participate. 125 had basic training (group I), 84 reported advanced training (group II), and 28 advanced training plus additional courses (group III). The participants’ real-life CPR experience and self-reported CPR skills was recorded, and then assessed on selected CPR quality indicators on a manikin. The data were analysed with multivariate logistic regression. Differences between groups were analysed with ANOVA/MANOVA.

Results: ALS was attempted in 454, 449, and 417 patients with OHCA in the ﬁrst, second and last time period, respectively in paper I. Overall survival increased from 7% (ﬁrst period) to 13% (last period). 977 patients were included in analyses in paper II, 232 (24%) and 741 (76%) were treated by PMA and non-PMA, respectively. The PMA group received better CPR quality but short-term and long-term survival were not different for patients treated by the PMA vs. non-PMA, with 34% vs. 33% (p = 0.74) achieving return of spontaneous circulation (ROSC), and 13% vs. 11% (p = 0.28) being discharged from hospital, respectively. In paper III, group II (advanced life support training) and group III (advanced life support training and additional courses) had shorter start-up time, better compression depth and hand positioning, higher fraction of effective rescue ventilations, shorter hands-off time, and thus a higher chest compression fraction than group I (basic life support training). Chest compression rate did not differ between groups. The participants in group I (basic training) assessed their own skills and preparedness significantly lower than groups II and III both before and after the test.

Conclusion: Survival after OHCA was increased after improving weak links of our local Chain of Survival. Survival after out-of-hospital cardiac arrest was not different for patients treated by the PMA and non-PMA in our EMS system. Training of non-professional bystanders is necessary and even basic training can provide high quality compressions. High quality airway management and ventilations seem to require more extensive training. Self- assessments of CPR ability correlated well to actual test performance and may have a role in probing CPR skills in students.