Development of a prognostic model for unfavorable outcome after lumbar microdiscectomy 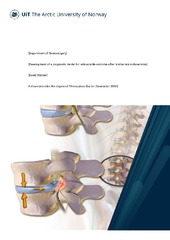 The aim of this thesis was to develop a prognostic model for unfavorable outcome 12 months after surgical treatment of a lumbar disc herniation (lumbar microdiscectomy). While the surgical procedure is rather uniform, with little technical variation, the reported outcomes are quite heterogenous. This might be due to different expectations by patients, or due to suboptimal surgical indication as concluded by the treating surgeon. We aimed to translate evidence from a large national database to clinical practice (benchmark to bedside) by creating a prognostic model for the most commonly performed spinal surgery. The thesis is based on three papers. In papers I and II we created cutoffs for negative outcome after lumbar microdiscectomy, by Receiver Operating Curve (ROC) analyses of several Patient Reported Outcome Measures (PROMs) against the Global Perceived Effectiveness (GPE) scale. The Oswestry Disability Index (ODI), a PROM specific to spinal disorders, was able to identify two outcomes, namely Failure (patient feeling unchanged or worse) and Worsening (patient feeling much worse or worse than ever) 12 months after surgery. We found that the absolute ODI score after 12 months had the highest accuracy identifying these outcomes, and that the cutoff value was highly dependent on the preoperative ODI score. In paper III we created a prognostic matrix by means of logistic binary regression analyses with previously identified risk factors for negative outcome after lumbar microdiscectomy. The matrix contains six pathways, based on baseline ODI and which outcome is to be predicted (failure or worsening). The matrix showed acceptable discrimination and calibration values. Only model pathway predicting worsening in the population with a baseline ODI above the 75th percentile was not optimally calibrated, yielding an underestimation of the negative outcome rates. In summary, we have determined outcome criteria for unfavorable results 1 year after lumbar microdiscectomy, based on PROMs in a large national spine registry. We created a prognostic model predicting both failure and worsening 1 year after lumbar microdiscectomy based on the presence or absence of patient specific risk factors. The model could be used for evidence based shared decision making in clinical practice, and help set expectations for both the patient and the surgeon in regards to outcome.