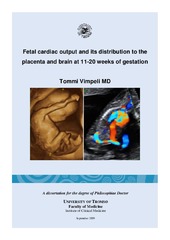 Objective: To study some aspects of fetal heart structure and function using ultrasonography at 11-20 weeks of gestation with an emphasis on the distribution of cardiac output to the placenta and upper body including brain.
Methods: In a cross-sectional study of unselected pregnant population, the structure of the fetal heart was studied using transvaginal ultrasonography and feasibility of obtaining standard echocardiographic views and measuring different structures was evaluated in 584 fetuses at 11+0-13+6 weeks of gestation. Reference ranges were established for the heart/ thorax circumference ratio, ventricular size and the diameters of the aorta and main pulmonary artery at the respective semilunar valve levels. The fetal cardiac function was studied in a prospective longitudinal study of 143 pregnant women from an unselected population who were serially examined three times during 11-20 weeks of gestation. Blood flow velocities and diameters of the main pulmonary artery, aorta, aortic isthmus and umbilical vein were measured using pulsed-wave Doppler and B-mode ultrasonography, respectively and the reference ranges were constructed. The volume blood flow (Q) was calculated as a product of mean velocity and cross-sectional area of the vessel. Reference intervals were established for the umbilical vein (Quv) and aortic isthmus (Qai) volume blood flows and the left (LVCO), right (RVCO) and combined (CCO) ventricular cardiac outputs. The fraction of CCO distributed to the placenta was calculated as: Quv/CCO*100 and the fraction of CCO distributed to the upper body and brain was calculated as: (LVCO – Qai)/CCO*100.
Results: It was possible to study the fetal heart anatomy by obtaining standard echocardiograhic views using transvaginal ultrasonograpy in a majority of cases in the late first trimester. The cardiac ventricles and their outflow tracts showed a linear growth with advancing gestational age during 11-14 weeks of gestation. The CCO increased 1.9-fold from 11 to 20 weeks of gestation and the placental volume blood flow almost tripled during the same period. The fraction of CCO diverted to the placenta increased from 14% at 11 weeks to 21% at 20 weeks. Aortic isthmus had a positive forward flow during the whole cardiac cycle during 11-20 weeks of gestation. Aortic isthmus blood flow velocities as well as the diameter increased with advancing gestation, resulting in a significant increase in Qai from 1.9 to 40.5 ml/min during 11-20 weeks. However, the fraction of CCO directed to the upper body including brain remained relatively stable (approximately 13%) during this gestational period.
Conclusion: It appears feasible to study fetal heart anatomy in late first trimester using transvaginal echocardiography and to confirm normality. We have established references ranges for the evaluation of some cardiac structures at 11-14 weeks of gestation and for the serial measurement of Quv, Qai and cardiac ventricular outputs at 11-20 weeks of gestation. Placental volume blood flow and the fraction of CCO distributed to the placenta increases substantially during 11-20 weeks of gestation reflecting faster placental growth relative to fetal growth and establishment of low resistance circulation during the first half of pregnancy. The fraction of cardiac output directed to the upper body and brain is relatively small but fairly constant during 11-20 weeks of gestation.