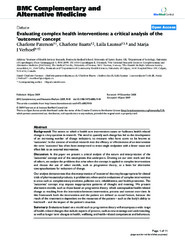 Background: The extent to which a health care intervention causes or facilitates health-related change is a key question in research. The need to quantify such change has led to the development of an increasing number of change indicators, to measure what have come to be known as 'outcomes'. In the context of medical research into the efficacy or effectiveness of an intervention the term 'outcomes' has often been interpreted to mean single endpoints with a linear cause and effect link to an external intervention.
Discussion: In this paper we present a critical analysis of the nature and interpretation of the 'outcomes' concept and of the assumptions that underpin it. Drawing on our own work and that of others, we analyse the problems that arise when the concept is applied to complex interventions and discuss the use of other models, such as programme theory, as a basis for alternative conceptualisations for indicators of change. Our analysis demonstrates that the interpretation of 'outcomes' that may be appropriate for clinical trials of pharmaceutical products, is problematic when used in evaluations of complex interventions in areas such as complementary medicine, palliative care, rehabilitation, and health promotion. The 'outcomes' concept may impose inappropriate patterns of thought and meaning. We present alternative models, such as those based on programme theory, which conceptualise health-related change as resulting from the interaction between intervention, process and context over time. In this framework both the intervention and the patient are defined as causal factors, because the result of the treatment is dependent on the resources of the patient – such as the body's ability to heal itself – and the impact of the patient's situation.
Summary: Evaluations based on a model such as programme theory will encompass a wide range of health-related changes that include aspects of process, such as new meanings and understanding, as well as longer term changes in health, wellbeing and health-related competences and behaviours.