Validity and responsiveness of EQ-5D-5L and SF-6D in patients with health complaints attributed to their amalgam fillings: a prospective cohort study of patients undergoing amalgam removal 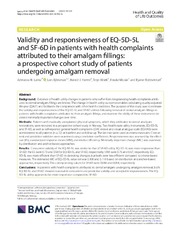 Background - Evidence of health utility changes in patients who suffer from longstanding health complaints attributed to dental amalgam fillings are limited. The change in health utility outcomes enables calculating quality-adjusted life-year (QALY) and facilitates the comparison with other health conditions. The purpose of this study was to estimate the validity and responsiveness of the EQ-5D-5L and SF-6D utilities following removal of dental amalgam fillings in patients with health complaints attributed to their amalgam fillings, and examine the ability of these instruments to detect minimally important changes over time.

Methods - Patients with medically unexplained physical symptoms, which they attributed to dental amalgam restorations, were recruited to a prospective cohort study in Norway. Two health state utility instruments, EQ-5D-5L and SF-6D, as well as self-reported general health complaints (GHC-index) and visual analogue scale (EQ-VAS) were administered to all patients (n = 32) at baseline and at follow-up. The last two were used as criteria measures. Concurrent and predictive validities were examined using correlation coefficients. Responsiveness was assessed by the effect size (ES), standardized response mean (SRM), and relative efficiency. Minimally important change (MIC) was examined by distribution and anchor-based approaches.