When is remission remission? Elucidating the remission state in Ulcerative Colitis: a multimodal exploration 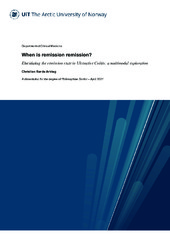 Ulcerative Colitis (UC) is a chronic, inflammatory disease of the colon that has a relapsing-remitting characteristic. The disease management consists of prolonging periods of remission and reducing relapse frequency. There is currently no universally accepted definition of remission in UC. There are different methods of establishing if a patient is in remission, but the lack of definition and knowledge make it difficult to know which method to use. The majority of these methods are poorly described for remission patients representing a substantial knowledge gap. This thesis explored the remission term by investigating the mucosal transcriptional profile in UC remission patients and the utility of histology and transcripts as evaluation modalities. We found that several of the gene transcripts investigated were differently expressed in UC remission patients in comparison to healthy controls. These genes were largely related to pro-inflammatory mechanisms and barrier dysfunction, indicating that despite an apparent normal mucosa in endoscopy, the mucosa differed on a transcriptional level. We then investigated if histology could detect inflammation and consistently classify a patient as in remission using the different scoring indices. The results showed that histology could detect inflammation not apparent on endoscopy, but the histologic scores varied too much to be accurate in a categorical classification. The main source of variance was the histologic raters. Lastly, we investigated if any of the clinical, endoscopic, histologic, or transcriptional variables could predict impending relapse in a survival analysis. The results showed that patients with a low ratio between two transcripts had 5.3 times higher risk of relapse. Histologic factors did not turn out to be predictive of relapse. The conclusion was that several gene transcripts were differently regulated in UC remission patients compared to healthy controls. Some of these may be able to predict relapse and have potential use as biomarkers to improve the current treatment regimes.