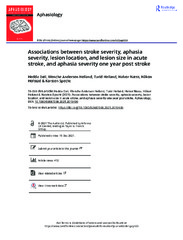 Methods - Thirty-three patients with aphasia were included in the study. They were assessed with a standardized aphasia test at admission to the hospital (T1), after 3 months (T2) and finally after 12 months (T3). Stroke severity, initial physical impairment, and initial functional independence were also assessed at T1. Diffusion-weighted magnetic resonance imaging was performed as clinical-routine at admission. Voxel-based lesion symptom mapping and a region of interest analysis (ROI) was performed to analyze MRI-findings.