A novel dual-task paradigm for evaluating the interplay between gait, cognition, and hearing loss in normal aging and MCI: Effects of Dichotic Listening during overground walking 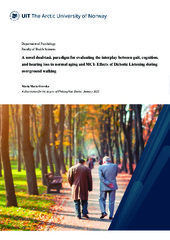 The association between gait and cognition in aging has been widely studied with the help of dual-task paradigms consisting of walking while simultaneously performing a cognitive task. However, previous dual-task research has lacked consistency in methods. In this doctoral work, we introduced a novel dual-task paradigm including Dichotic Listening (DL) performed concomitantly with walking overground. Dichotic listening assesses spontaneous attention and directed attention to either right or left-ear. The overall aims were to evaluate how lateralized attention affects walking in young adults, healthy older adults, and in individuals with mild cognitive impairment (MCI). The moderating influence of hearing-loss on dual-task performance was also investigated. All participants went through a comprehensive neuropsychological assessment and pure-tone audiometry. Spatiotemporal gait parameters were obtained for both feet and separately by foot using the OptoGait system. Factorial analyses of variance and covariance were used to assess group differences and the moderating effects of hearing status, respectively. Performing DL while walking overground increased gait variability and gait asymmetries in most participants. Unexpectedly, this was seen in the healthy groups and after controlling for hearing acuity. Spontaneous attention evoked gait asymmetries and higher variability in gait. The directed attention conditions caused further increase in variability, as well as asymmetries. The seniors with cognitive impairment did not show asymmetrical gait effects. The present work shows that lateralized attention control depends on hearing acuity and affects gait differently in healthy populations and MCI. We consider DL a robust and ecological test to untangle the intricate interplay of sensory, cognitive, and motor deteriorations in aging.