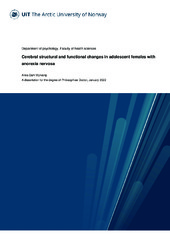 Cerebral structural changes are associated with acute AN. Volume reduction is found in several regions, but it is unclear if this is a global phenomenon and how other morphological measures are affected. Cortical thickness (CTh) and surface area (CSA) are morphometrics that are less studied and develop with different trajectories in adolescence, when AN normally debuts. Alterations in the brains functional networks have been found in several studies, but findings are discrepant, and few have investigated multiple networks and in relation to core symptoms. A structure-function link is suggested but not established. This thesis aimed to investigate different morphometrics and multiple brain networks to improve our understanding of how AN affects connectivity in the developing brain and associations to symptoms, age and structural brain alterations. Thirty young females with restrictive AN and healthy age-matched control participants were included in the study and underwent clinical screening and MR imaging. MR data was preprocessed and analyzed with state-of-the-art analysis methods. Results showed that the hippocampus was reduced in AN, adjusted for whole brain volume and that most subfields were affected. Investigations of cortical thickness and surface area showed overlap between the two morphometrics, but some areas differed. Most of the brain appear to be affected by structural alterations. Among several functional networks studied, three showed reduced connectivity that was associated with age and cortical thickness. Results indicate that the hippocampus and its subfields are reduced and perhaps more affected than the brain as a whole. Results strengthen previous findings regarding cortical thickness reduction. The study provides novel insight into cortical surface area reduction in adolescent AN and show with a novel method that may supersede traditional morphometrics, that most of the cortex is affected. Functional results indicate that development of connectivity is disrupted in AN and that a structure-function link may exist.