Unilateral modification and withdrawal of WTO concessions and commitments 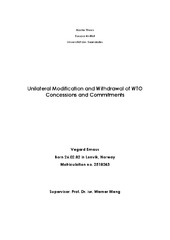 This master's thesis was done at Europa-Institut, Universität des Saarlandes, as part of the candidate's master's degree from Faculty of Law, University of Tromsø.