Immediate function on the day of surgery compared with a delayed implant loading process in the mandible: A randomized clinical trial over 5 years 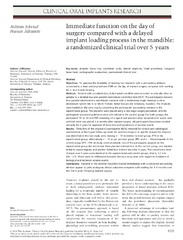 Objectives: To appraise the feasibility of loading four implants with a pre-existing denture converted to a fixed dental prosthesis (FDP) on the day of implant surgery compared with waiting for 3- to 4-month healing.

Methods: Patients with an edentulous, fully healed mandible were recruited in a faculty clinic to partake in a blinded two-arm parallel randomized controlled trial (RCT). The participants received four parallel intraforamina mandibular implants with a moderately rough titanium surface (Brånemark System Mk III or Mk IV TiUnite; Nobel Biocare AB, Goteborg, Sweden). The implants € were loaded on the same day by converting the participants’ pre-existing denture in the experimental group. The implants were placed using a one-stage surgery procedure, and the participants’ pre-existing denture were soft-relined in the control group. For both groups, the permanent 10- to 12-unit FDP consisting of a type-3 cast precious alloy veneered with acrylic and artificial teeth was placed 3–4 months after implant surgery. All participants have been recalled annually for 5 years for appraisal of bone loss and registration of adverse events.

Results: Thirty-five of the original 42 participants (83%) returned for clinical and radiological examinations at the 5-year follow-up recall. No selective dropout or specific reasons for dropout was identified in the two study arms; leaving n = 17 (Intention-to-treat group, ITT) in the experimental group, alternatively n = 13 as per protocol group (PP), and n = 18 participants in the control group (ITT = PP). At study commencement, five of the participants assigned to the experimental group did not receive their planned intervention. In the control group, one implant failed to osseointegrate and another failed due to bone loss after 5 years. The crestal bone level changes over 5 years were identical in the experimental and control groups, that is, 1.2 mm (SD = 0.7). There were no differences between the two study arms with regard to incidence of biological and technical adverse events.

Jokstad A, Alkumru H. Immediate function on the day of surgery compared with a delayed implant loading process in the mandible: A randomized clinical trial over 5 years. Clinical Oral Implants Research. 2014;25(12):1325-1335