The potential for cooperation in shared fisheries : theory and application to Vietnam's fisheries strategy in the South China Sea 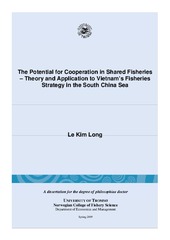 Since the end of the 20th century, many shared fish stocks throughout the world have been found in extreme danger of collapse. There are many calls for cooperation in utilizing and conserving the shared fish resources including the 1982 UN Convention on the Law of the Sea and the 1995 UN Fish Stock Agreement. This study provides an important rationale for cooperation in utilizing a shared fish stock with several interested parties. The rationale is that an increase in the cooperation level leads to an increase not only in the steady-state fish stock, but also in total rent of the fishery. Moreover, the possibilities for cooperation in utilizing shared fisheries are examined. Some measures are also proposed to improve the cooperation level. According to this study, the prospects of cooperation in utilizing a straddling fish stock are not unlikely if a Regional Fishery Management Organisation (RFMO) forms with a leading role in a Stackelberg game or with an endogenous minimum participation level in a Cournot game. However, if the cost of enforcing RFMO members’ compliance with the terms of the agreement is high enough, there may not be any incentive for fishing countries to establish an RFMO for managing a straddling fish stock. This is one of the reasons for pervasive over-fishing around the world. For an actual example, the South China Sea (SCS) fishery, which is harvested by about ten countries including Vietnam, will be discussed as an application. An empirical investigation of the profitability and remuneration of an offshore long-line fishery demonstrates slightly above-average earnings even under the current open-access regime. Finally, the study will propose some fishery strategies for Vietnam, which is a country with heavy inshore fishing, the second largest catch in the South China Sea and where large-scale illegal fishing takes place.