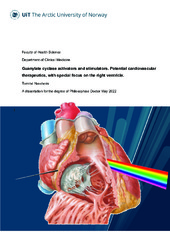 Background - Soluble guanylate cyclase, sGC, is a major contributor to the signal transduction in the cardiovascular system, and dysfunction in the NO-sGC-cGMP signaling plays an important role in cardiovascular disease. This system is sensitive to a wide variety of pathological conditions spanning from substrate shortage to sGC-insensitivity to nitric oxide (NO), during pathological oxidative states. SGC-activators (sGCA) and -stimulators (sGCS) bypass the need of NO for sGC-activation. Furthermore, both compounds stimulate sGC despite high oxidative states and represent an alternative pathway to induce cGMP-production and a potential target to restore cGMP-signaling during pathological conditions.

Aims - Pharmacological principles acting through the NO-sGC-cGMP-pathway have been extensively utilized in cardiac failure therapy. This includes NO-donors and PDE inhibitors. These drugs have limitations in pathological conditions, both regarding effect and tolerability. Direct sGC stimulation and activation represents a promising principle to overcome these challenges. We therefore addressed cardiovascular effects of the guanylate cyclase stimulator Riociguat and the guanylate cyclase activator Cinaciguat using large animal models.

Methods - Healthy pigs were instrumented for systemic and pulmonary hemodynamic measurements. The hemodynamic effects were investigated in a closed chest model through a dose finding study. We then made repeated measurements during administration of sGCA and sGCS with additional manipulation of NO-tone using nitroglycerin (NO-infusion) and L-NAME (N-nitro-L-arginine methyl ester, a NO-blocker). Subsequently, we assessed the effects of sGCA and sGCS on cardiac energy metabolism in an open chest model. Finally, we evaluated the influence of these drugs on venous vascular compliance and liver blood flow in a closed chest, open abdomen model.

Results and conclusions - Our experiments confirm the principal pharmacological properties of Riociguat and Cinaciguat as potent systemic arterial vasodilators without pulmonary selectivity or inotropic effects. The direct cardiac effects are limited to a minor diastolic alteration possibly related to changes in vascular loads. No major effect on venous vascular tone could be discerned in our large animal model. Importantly, while Riociguat acts in concert with NO and is modulated by NO-tone, Cinaciguat works independent of the NO-system and blocks the physiological NO-tone in the vascular system.