Evidence of large systematic differences between countries in assigning ischaemic heart disease deaths to myocardial infarction: the contrasting examples of Russia and Norway 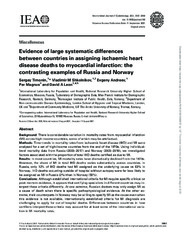 Background: There is considerable variation in mortality rates from myocardial infarction (MI) across high-income countries, some of which may be artefactual. Methods: Time trends in mortality rates from ischaemic heart disease (IHD) and MI were analysed for a set of high-income countries from the end of the 1970s. Using individuallevel mortality data from Russia (2005–2017) and Norway (2005–2016), we investigated factors associated with the proportion of total IHD deaths certified as due to MI.

Results: In most countries, MI mortality rates have dramatically declined from the 1970s. However, the share of MI in total IHD deaths varies substantially across countries. In Russia, only 12% of IHD deaths had MI assigned as the underlying cause vs 63% in Norway. IHD deaths occurring outside of hospital without autopsy were far less likely to be assigned as MI in Russia (2%) than in Norway (59%).

Conclusions: Although established international criteria for MI require specific clinical or post-mortem evidence, it appears that certifying specialists in different countries may interpret these criteria differently. At one extreme, Russian doctors may only assign MI as a cause of death when there is specific pathophysiological evidence. At the other extreme, their counterparts in Norway may be willing to specify MI as the cause even when this evidence is not available. Internationally established criteria for MI diagnosis are challenging to apply for out-of-hospital deaths. Differences between countries in how certifiers interpret these criteria may account for at least some of the international variation in MI mortality rates.