The role of the estrogen receptor α in the medial amygdala and the ventromedial nucleus of the hypothalamus in sexual motivation, social recognition, aggression and anxiety 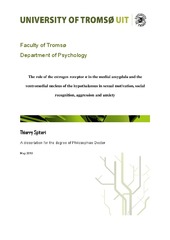 Estrogens have been shown to be implicated not only in sexual behaviors but also in several cognitive functions, social behaviors, and emotional reactions. Estrogen receptors mediate estrogen actions in the brain and the estrogen receptor α (ERα) has attracted some attention. Although the display of female sexual motivation and copulatory behaviors require estrogens, their sites of action in brain are unknown. The effects of estrogens on social recognition are inconsistent. Assuming that estrogens affect social recognition through the ERα, it may be asked at which brain sites ERα may act. Data showed that estrogens, at least in part, through ERα, influence anxiety and aggression. Although the ventromedial nucleus of the hypothalamus (VMN) and the posteriodorsal amygdala (MePDA) are involved in these behaviors, the role of ERα within these structures remains unknown. To achieve knockdown of ERα in the VMN and the MePDA of the adult brain, ovariectomized females were infused bilaterally by an adeno-associated virus vector (AAV) expressing a shRNA targeting ERα. We used this technique to delineate the role of ERα in the VMN and the MePDA in sexual behaviors, social recognition, anxiety, and aggression in female rats. A review of experiments employing the sexual motivation test used in this work suggests that this procedure provides a precise estimation of sexual motivation in female rats, and it could be used as a preclinical model. Sexual motivation was abolished and copulatory behaviors were reduced by ERα knockdown in the VMN. Consequently, the ERα in the VMN, but not in the MePDA, is crucial for the entire sequence of sexual behaviors. The second experiment established that ovarian hormones, particularly estrogens, have a facilitatory effect on social recognition. The third experiment showed that ERα knockdown in the MePDA suppressed social recognition and reduced anxiety in non-social context. In contrast, ERα knockdown in the VMN enhanced aggression against the juvenile but not against adults. Thus, ERα in the MePDA contributes to social recognition and modulates anxiety, while ERα in the VMN could partially regulate aggression in social context. In conclusion, present results suggest that the ERα in the VMN and the MePDA may assure the display of adaptive behaviors during sexual interactions.