Interleukin 33: a locally induced alarmin in the colonic mucosa of ulcerative colitis 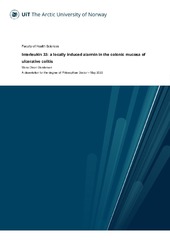 Ulcerative colitis (UC) is a chronic inflammatory bowel disease involving the mucosal lining of the large bowel (colon and rectum). Common symptoms include bouts of diarrhoea, rectal bleeding and abdominal pain. The pathogenesis of UC is complex and multifactorial. This thesis investigated interleukin 33 (IL-33), an alarmin of the innate immune system. IL-33 is of interest as it is found to be upregulated in UC during active disease. IL-33 is also found to accumulate beneath mucosal ulcerations in UC suggesting a role in mucosal healing. We aimed to explore mediators associated with IL-33, inflammation and fibrosis in colonic biopsies from patients with acute and quiescent UC disease. We found mucosal mRNA IL33 to be raised in biopsies with UC compared to healthy controls. Immunostaining revealed IL-33 to be present in the epithelial barrier during active UC, but not in quiescent disease or healthy controls. Furthermore, a significant number of gene transcripts associated with fibrosis were found to be dysregulated in the UC mucosa and of interest for future research. To investigate IL-33 expression in the colonic epithelium, a human ex vivo model based on endoscopic biopsies was developed. Stimulation with hypo-osmotic stress induced a strong IL-33 signal in epithelial cells, linking IL-33 to a cellular stress response. In conclusion, IL-33 is an inducible nuclear factor in the colonic epithelium. In our studies we found epithelial IL-33 to be associated with active UC disease and hypo-osmotic stress. The use of a human explant model shows promise for further studies of inflammatory mediators in the colon.