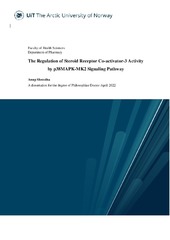 Steroid receptor co-activator-3 (SRC-3) is a co-activator that plays important roles in normal physiology and different diseases including cancer. Its activity is regulated by phosphorylation. Serine 857 (S857) is the most frequently reported phosphorylation site of SRC-3. In this work, we examined several kinases that could phosphorylate SRC-3 at S857 and explored the functional outcome incurred therein. We found that different p38MAPK activators induced phosphorylation of SRC-3 at S857 in a wide range of cell lines. Moreover, using MK2 specific inhibitor and MK2 knockout cell lines we demonstrated that MK2, the immediate downstream target of p38MAPK phosphorylates SRC-3 at S857. The activation of p38MAPK-MK2 signaling resulted in nuclear translocation of SRC-3 where phosphorylation of SRC-3 at S857 enhanced the transcriptional activity of NF-B and IL-6 expression in A549 cells. We found doxorubicin induced the activation of p38MAPK-MK2-SRC-3 signaling axis in triple negative breast cancer (TNBC) MDA-MB-231 cells. We studied the role of SRC-3 and SRC-3 S857 phosphosite in doxorubicin-induced cytotoxicity using SRC-3 depleted MDA-MB-231 cells and SRC-3 depleted cells rescued with either wild-type or mutant SRC-3 S857A. Our results revealed that depletion of SRC-3 or use of MK2 inhibitor increased the sensitivity to doxorubicin. In line with this, SRC-3 depleted cells rescued with mutant SRC-3 S857A were more sensitive to doxorubicin than the one rescued with wild-type SRC-3. Furthermore, we have identified several genes dependent on SRC-3 S857 phosphosite and those regulated by p38MAPK-MK2-SRC-3 signaling pathway in TNBC cells. Many of them have been previously reported to be involved in cancer. The identification of MK2-SRC-3 pathway suggests that MK2 can be a new therapeutic target to regulate the tumorigenic activity dependent on SRC-3 S857 phosphosite.