Alcohol and aging: A longitudinal study of alcohol habits and health effects due to alcohol consumption in old adulthood 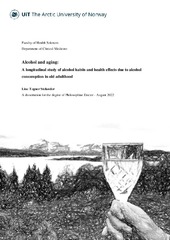 Alcohol use is a leading risk factor for injuries, mortality and the burden of disease. Alcohol consumption among older adults varies considerably, depending on factors such as age, social class, education, ethnicity, time period and geographical setting. Furthermore, the health effects associated with alcohol consumption in old age are an under researched area. The overall aim of this thesis was to investigate trends in alcohol consumption among older adults (60 years or older) from the same geographical setting across 25 years, and any health effects due to alcohol consumption. Participants aged 60–99 when attending the Norwegian population-based Tromsø Study were followed for up to 25 years. The overall abstinence rate decreased considerably between 1994 and 2016, from 31 % to 11 %. The probability of reporting frequent drinking increased more among women compared to men (6-8-fold increase compared to 3-4-fold increase). The overall prevalence of at-risk drinking was equal in women and men in 2016; 44 % and 46 %, respectively. At-risk drinking was associated with very good health, living with a spouse or partner, and having adequate social support in women, while it was associated with the use of sleeping pills in men. We found that women, but not men, who consumed ≥ 100 g / week had better self-rated health than those who consumed < 100 g / week (OR 1.85, 95 % CI 1.46-2.34). Our findings indicate that women’s drinking patterns are approaching those of men. So far there is no definite evidence of increased mortality in the heaviest drinkers, as their balanced risk factors appear to be beneficial. Nevertheless, we conclude that our findings imply that a change in governmental strategies and alcohol policy to influence alcohol consumption among older adults should be considered.