Child Mental Health in Nepal. An epidemiological study of emotional and behavioral problems (EBP) among Nepali schoolchildren reported by parents and teachers 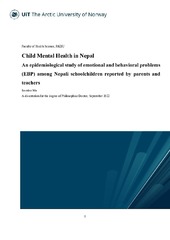 Background - There is a substantial gap in our knowledge about the prevalence, magnitude, and correlates of child emotional and behavioral problems (EBPs) in Nepal. Little is known about the agreement between parent and teacher reports on EBP among Nepali children. Therefore, a large-scale survey in the general population was undertaken to fill this gap.

Methods - This is a cross-sectional, observational study among schoolchildren aged 6-18 years from 64 schools selected from 16 districts of the three geographical regions of Nepal, including rural, semi-urban, and urban areas. We used the Nepali version of the Child Behavior Checklist (CBCL)/6-18 years completed by parents and the Teacher Report Form (TRF)/6-18 as screening instruments. We used questionnaire to collect background information and assess possible family correlates, including parental education, family structure, migrant worker parents, parental mental and physical illness, family conflicts, and child-rearing reported by parents. The prevalences of child EBPs were computed based on American norms. Comparisons of parent-reported EBPs between genders and across the seven largest castes and ethnic groups were carried out by analysis of variance. The associations between family variables and child internalizing and externalizing problems were analyzed using bivariate correlations and multiple regression. Linear mixed model analysis was used for group comparisons of TRF scale scores and for computing intraclass correlations of teacher reported EBPs. Correlations between the CBCL and TRF scale scores were analyzed using Pearson’s correlation test.

Results - The prevalence of parent and teacher reports of Total Problems found in this study were 19.1% and 15.4%, respectively. In both the parent and teacher reports, the prevalence of internalizing problems was higher than that of externalizing problems. The mean CBCL scale scores for Total, Externalizing, and Internalizing problems were 29.7 (standard deviation, SD 25.6), 7.7 (SD 8.0), and 9.1 (SD 8.1). Corresponding mean TRF scale scores were 26.9 (SD 24.5), 6.1 (SD 7.2), and 7.9 (SD 7.3) respectively. For both parent and teacher reports, mean scores for Total Problems and Externalizing Problems were higher among boys than girls. The lowest Hindu caste scored the highest and the indigenous Tharu group scored the lowest on all problem scales. CBCL scores of EBP were higher in the rural areas of the Mountains and Middle Hills regions, whereas in the Tarai region, these scores were higher in the urban areas. The size of the effect was small in all the tests. Using parent reports and bivariate analysis, we found that mental and physical illness in parents, conflict in the family, parental disagreement in child-rearing, and physical punishment of the child correlated positively with both Internalizing Problems and Externalizing Problems. The same associations were found by using multiple regression analysis with small effect size. In addition, parental education, family structure, and migrant worker mothers were associated with Externalizing Problems. Cross-informant agreement between parents and teachers was moderate (r=.38). The agreement for Externalizing Problems was r = .37 and the agreement for Internalizing Problems was r = .34. Moderate to low correlations were found for all syndrome scales, with coefficients ranging from r=.26 (Social Problems) to r=.37 (Attention Problems). The effect of child gender on parent-teacher agreement was significant only for Internalizing Problems, with a higher agreement for girls than for boys with small effect sizes.

Conclusion - Our study showed that child EBP scores varied according to gender, caste/ethnic group, and living area. The cross-informant agreement between parents and teachers was found to be moderate and varied according to the type of problems and the child’s gender. Further, the study found that child mental health problems were associated with several family risk factors. Finally, the study points to the need to acquire information from multiple sources when assessing children with mental health problems.