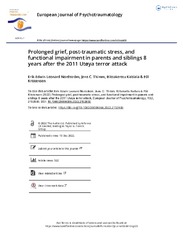 Background: Research on bereavement after terrorism is limited and primarily aiming on short-term consequences. Objective: To better understand the long-term health consequences of terrorism, we studied bereaved parents and siblings eight years after the Utøya terrorist attack in Norway. We examined the participants’ symptom levels of prolonged grief (PG) and post-traumatic stress (PTS), as well as their psychosocial functioning and employment status.

Method: Bereaved parents (n = 88) and siblings (n = 34) aged 19 and above (mean age = 49.7 years, SD = 13.8 years, 59.8% female) completed the Inventory of Complicated Grief (ICG), the Impact of Event Scale-Revised (IES-R), and the Work and Social Adjustment Scale (WSAS) to assess PG, PTS, and functional impairment, respectively. In addition, information about employment status was obtained. The proportion of participants scoring above recommended thresholds on the ICG, IES-R, and WSAS was calculated. Differences between parents and siblings and gender differences on these measures were examined.

Results: In total, 62.3% of the participants had scores on the ICG indicating a risk for prolonged grief, while 45.9% scored over cutoff on the IES. There was a high overlap between symptoms of PG and PTS. Females had significantly higher scores on both the ICG and the IES compared to males. There were no differences between parents and siblings regarding PG and PTS symptoms. One out of three showed severe functional impairment on the WSAS. Approximately 30% of all the bereaved were outside the labour force, and one third of the parents had become unable to work after the terrorist attack.

Conclusion: Many bereaved parents and siblings, following the Utøya terror attack, report long-lasting health consequences with symptoms of PG and PTS and functional impairment. The results suggest a need for follow up of bereaved after a terror attack and identify family members in need of health services.