Towards the Semantic Desktop 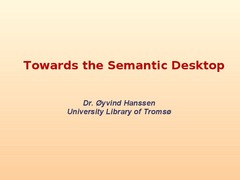 In this presentation we describe some key aspects of the social semantic desktop vision, the main results of research by computer scientists in this area so far. We discuss how this may change the way people manage and share their information, and we discuss how this may change the role of academic librarians.
The trends seem to point towards that computers will be more personal and personalised. People will wish to use different platforms, different applications, and in particular, they will have different views on information they use and store on their computers. Furthermore, we believe there will be a need for more direct and ad hoc sharing of information between individual's computers as well as between different applications. The social semantic desktop is envisioned to evolve from the following current key areas: (1) Desktop computing, (2) the semantic web, (3) distributed computing, P2P networking in particular, and (4) online social networking. An important part of this process is the idea of the semantic desktop. This was envisioned already in 1945 by Vannevar Bush by describing an imaginary device called the Memex, that could manage and store the relevant information used by an individual. He was ahead of his time and now, over 60 years later this vision is being realised. Key enabling factors, include the vast amount of storage available on a typical PC (with terabyte harddisks soon becoming common), as well as the emergence of semantic web technology. The semantic desktop is envisioned to evolve from traditional desktop computing, using semantic web technology to enable automatic classification and relating of information from different applications and sources. A key factor is metadata and management of such, typically by using the Resource Description framework (RDF), ontologies, vocabularies and classification schemes.
It is likely that the social semantic desktop will have an impact on scientific collaboration and publication, and consequently on academic libraries. An important challenge will be to integrate the varying views on the information. There will be personal and application specific ontologies, and there will be ontologies specific to various research areas and research communities. Research librarians may be given a role in specifying and mapping between different ontologies and metadata – personal, social and institutional, as well as managing the computational infrastructure supporting the interoperability.