Complexity in plasma and geospace systems 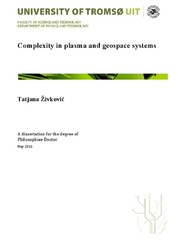 The subject of this thesis is self-organization, chaos and stochastic dynamics in laboratory plasmas, the magnetosphere, and in the Earth's climate system. For each of these systems we pose the question whether the global dynamics can be described by a set of a few variables governed by the same small number of deterministic equations. This problem is not trivial, because low-dimensional deterministic systems may exhibit chaotic dynamics where the solutions are sensitive to the initial conditions, and in most respects are indistinguishable from stochastic, noise-like dynamics. A number of data analysis methods for time series are employed and adapted to the problems at hand. Among these methods are time-delay phase space reconstruction, correlation-dimension estimation of strange attractors, recurrence plots, empirical mode decomposition, wavelet decomposition, estimation of predictability and long-range memory, estimation of low-dimensional determinism of the dynamics, and principal value decomposition. The analysis is complemented by numerical simulations of simple dynamic-stochastic model systems. Some of these have solutions with known properties, some low-dimensional and chaotic, and some are realizations of well-known stochastic processes. These are used to benchmark the analysis methods. Other models are designed to provide solutions with statistical properties very similar to those of the observational signals, and hence can be considered as minimal models for the phenomenon at hand. The thesis consists of an introductory part and four journal papers. The former briefly reviews the basics of low-dimensional dynamical systems and the reconstruction of the phase-space attractor from experimental time series, long-memory stochastic processes, and critical phenomena with emphasis on self-organized critical dynamics. We also review the data analysis methods employed in this work, and finally we give an introduction to, and some examples from, the particular plasma laboratory and geospace systems which are studied in more detail in the papers. This part ends with a section where some of the analysis methods are employed to climate data. This section has been included because climate dynamics appears to be a promising field for application of these concepts and methods, although this author has not published or submittet journal papers on this application yet. Paper 1 and Paper 2 deal with the detection of low-dimensional chaotic dynamics on time scales longer than those of the turbulent plasma dynamics in the laboratory Helimak configuration, and estimation of the largest Lyapunov exponent and the fractal dimension of the phase-space attractor. These estimates give us the degree of unpredictability and indicate how many equations we need to describe the chaotic dynamics. In Paper 3 and Paper 4 we estimate the degree of predictability and the organization of a deterministic component in the global magnetosphere during magnetic storms and substorms, respectively. These are accompanied by simultaneous estimations of solar wind parameters which are known to influence magnetospheric dynamics. From these results one may draw conclusions about the causal relationship between perturbations in the solar wind and in the magnetosphere, and infer that the organization of the magnetosphere during these events are internal processes and not imposed by an organization of the solar wind.