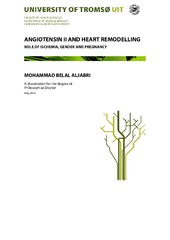 In this thesis different factors that promote or inhibit heart remodelling induced by angiotensin II were studied. The following conclusions can be drawn: 1. The presence of elevated levels of Ang II in the perfusion buffer did not increase myocardial injury during ischemia-reperfusion. However, the ability to protect the heart by ischemic postconditioning was lost. This seemed to be due to blockade of ERK1/2 signalling and GSK3-β inhibition induced by postconditioning. Elevated levels of Ang II, which is seen in untreated cardiovascular disease and in kidney disease, could therefore contribute to limit the outcome of the potential clinical use of postconditioning. 2. Non-compensatory (non-hypertrophic) heart remodelling was triggered by high-dose Ang II. This leads to changes in the contractile apparatus and reduced tolerance to ischemia in the absence of cellular hypertrophy. Increased expression of key genes involved in fibrosis was followed by an increase in interstitial fibrosis in heart tissue, which partly explains the post ischemic diastolic dysfunction. 3. Pregnancy did protect against the detrimental effects of Ang II since cardiac remodelling, fibrosis and reduced vessel density were less prominent in pregnant rats. 4. Iso treatment induced heart hypertrophy in both genders, but increased fibrosis was found only in males. Unlike the situation with exposure to high concentrations of Ang II, female gender did protect against the increase in fibrosis after Iso treatment. In summary, we can conclude that female gender and the unique female physiological status of pregnancy protect the heart, and provide a better handling of various stress stimuli after moderate Ang II and β-adrenergic influence. When the angiotensin II exposure reaches sub-toxic levels the protection afforded by female gender is lost.