Psychosocial predictors of an interest in cosmetic surgery : based on a population study of young Norwegian women 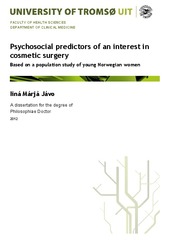 This thesis aims to provide more knowledge about psychological and social aspects of cosmetic surgery, in particular what factors are associated with the increased interest in having such surgery oneself. The first paper is angled from a more public health perspective, with focus on what factors predicts whether someone considers having cosmetic surgery in general. In the second paper, the focus shifts to a slightly more clinical perspective when various characteristics in women interested in the four most common cosmetic surgical procedures are studied. Finally, the association between eating problems and an interest in liposuction is investigated in the third paper. All papers are based on the same sample of 1862 women aged between 18 and 35 years who responded to a questionnaire sent to 3500 women randomly drawn from the general population in 2006. Forty-nine percent of the respondents were interested in cosmetic surgery. The multiple regression analyses found that several psychological and social factors predicted such an interest. A low educational level was one of the strongest, and the only common predictor, throughout all subgroups. Social factors such as being recommended cosmetic surgery or knowing someone who had had cosmetic surgery, and psychological factors such as poor body image predicted an interest in cosmetic surgery. When studying the characteristics of women interested in the different cosmetic surgery procedures, an interest in abdominoplasty was associated with less psychological and more social factors, notably having children. The strongest predictor of an interest in liposuction was being divorced and/or separated. It was found that 52% of women with eating problems would consider liposuction, which is almost three times the percentage found in women without eating problems.