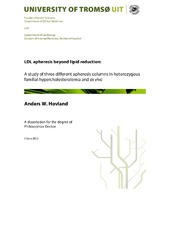 When low density lipoprotein (LDL) cholesterol cannot be adequately controlled by medications, it is possible to reduce LDL-cholesterol by means of LDL apheresis. This extracorporeal treatment is most often used in familial hypercholesterolemia (FH). The procedure is known to reduce LDL-cholesterol significantly. Few studies however, have prospectively and systematically examined how different LDL apheresis columns affect other constituents than LDL-cholesterol; including complement activation, cytokines, hemostatic factors and lipoprotein(a) (lp(a)). We conducted a clinical (papers I-III) and then an ex vivo study (paper IV) to examine how three different LDL apheresis columns; DL-75, LA-15 and EC-50W affected these factors. The first paper showed that the terminal complement complex (TCC) increased for all of the columns demonstrating complement activation to completion. The anaphylatoxins C3a and C5a were lowered the most by the columns DL-75 and LA-15, some of the pro-inflammatory cytokines were reduced more by DL-75 and LA-15 than EC-50W. In paper two we found that while fibrinogen was lowered by all columns, thrombin-anti thrombin increased the most with DL-75 and the least with LA-15, and plasminogen activator inhibitor 1 was lowered the least with EC-50W. Paper three demonstrated significant decrease in lp(a), no differences between the columns, the isoform of the apolipoprotein particles was not changed during treatment. In paper four (ex vivo) TCC was generated by LA-15 and EC-50W, but to a lesser degree by DL-75. Activation through the classical pathway was demonstrated for LA-15 and EC-50W, while activation through the alternative pathway was shown for LA-15. The anaphylatoxins C3a and C5a were equally induced by LA-15 and EC-50W. In conclusion, the clinical study showed complement activation through the alternative pathway, while the ex-vivo study demonstrated activation through the classical pathway as well. DL-75 and LA-15 were less pro-inflammatory than the filtration column EC-50W. The least hemostatic column could not be identified, while all columns lowered lp(a) significantly.