Vitamin D, Depression and Headache - Results from the Tromsø Study and an intervention study with vitamin D 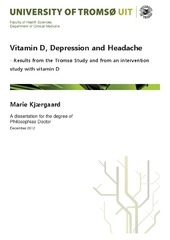 Vitamin D is well known for the effect in bone metabolism and calcium regulation. In the past decade increasing evidence that vitamin D might be important in other areas has emerged. Especially glucose metabolism, cardiovascular disease and infectious diseases have been investigated. In addition, several population studies have shown that an association between vitamin D and depression might be of importance. Furthermore, increasing headache prevalence with higher latitudes has led to theories about a relation between headache and vitamin D. Our analyses from the Tromsø Study confirm that low levels of vitamin D are associated with higher depression scores independent of lifestyle factors that might influence vitamin D. However, whether vitamin D has any effect in treatment of depression cannot be answered from this type of study. We further investigated this by treating 243 healthy persons with either vitamin D or placebo for six months and monitoring depression by use of questionnaires and interviews. We found no superior effect of vitamin D compared with placebo in our study, but other studies suggest vitamin D might be beneficial in persons with more severe depressive symptoms. Furthermore, we did analyses of the depression questionnaires used (BDI-II, HADS, MADRS), and found that they are solid instruments, which can also be used in a healthy population. The analyses of the data from the Tromsø Study in addition showed that Tension-Type Headache are associated with low vitamin D levels, but even though adjustment were made for lifestyle factors, it is possible that this association is caused by an unhealthy lifestyle in persons with headache. We did not find any association between vitamin D and migraine. Further studies are needed to confirm these findings.